Those who love classic iron from bygone eras were thrilled by the incredible collection of fine automobiles at the 62nd Annual San Francisco International Auto Show. Held downtown at the Moscone Center on the 700 blocks of Howard Street, from November 28 – December 2, 2019, the show featured vehicles from 33 global manufacturers, as well as numerous special exhibits from sponsors. 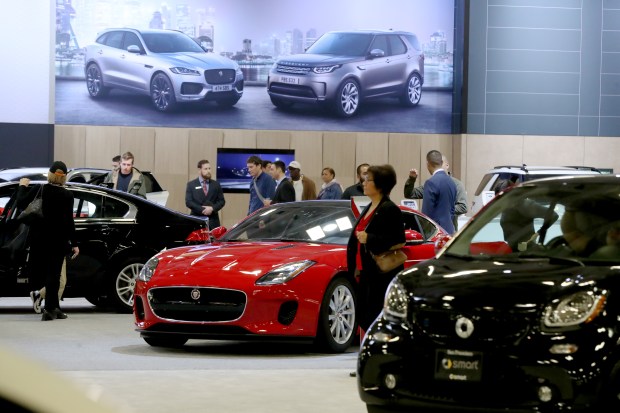 The original collection was started by the late Dr. Richard A. Stephens, President Emeritus of Academy of Art University, son of its founder, Richard S. Stephens, and father of the current president, Dr. Elisa Stephens. Academy students in the School of Industrial Design, and students pursuing the new Associate of Arts degree in Automotive Restoration can learn and be inspired by classic cars that have been fully restored to the highest standard.

This year’s theme for the Academy of Art University display is “Town and Country,” featuring cars from metropolitan areas and selection cars and vintage trailers one might find in the countryside. Vehicles expected to be on display at the Academy’s SF International Auto Show display include:

Antonio Borja, Director of the Academy of Art University School of Industrial Design, gave space for students at the Academy to display live sketching and using VR technology to create car designs. This allowed guests to have a glimpse into the process of how cars are designed today. For more information about the Academy display, visit its page on the SF International Auto Show website.

As a unique feature within the Academy of Art University display at the 62nd annual San Francisco International Auto Show, the Academy will showcase a first-generation 1989 Mazda Miata and current generation 2019 Mazda Miata to celebrate the 30th anniversary of this sporty favorite. This recognition is to honor the Executive Director of the Academy’s School of Industrial Design, Tom Matano, who is responsible for the Miata’s original design.

Matano has almost 30 years of experience in the automotive industry and is responsible for design contributions at General Motors and BMW. In 1983, he joined Mazda’s North American studio as a Chief Designer. From there, he went on to become Executive Vice President of Western Operations for Mazda R&D North America, Inc., and Executive Designer & Director of Mazda North American Operations.

From 1999 to 2002, Matano was headquartered in Japan as Mazda’s Executive Designer in the Global Advance Studio, overseeing efforts for Japan, Europe, and North America. He eventually became General Manager of Mazda Design, in charge of all Chief Designers. His many accomplishments at Mazda include the Miata and the 1993 RX-7.

Since 2002, Matano has invested his knowledge and expertise in the students of the Industrial Design program at Academy of Art University in San Francisco.

About Academy of Art University

In addition, Industrial Design students have benefitted from periodic, collaborative partnerships with automotive companies and other design organizations to obtain hands-on experience on real-world projects. Some of these recent include designs for a 2025 Buick, 2030 Jaguar, 2040 Audi, 2030 Subaru, and even self-driving Volvo trucks.